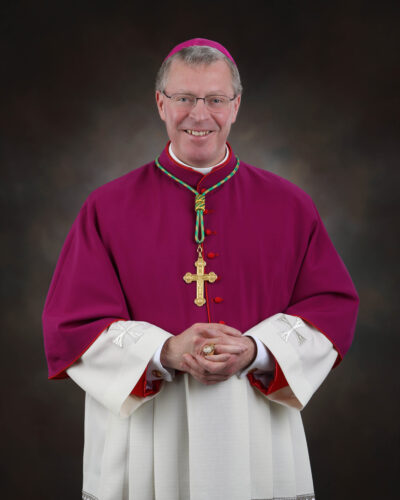 11TH BISHOP OF THE DIOCESE OF HELENA

Austin Anthony Vetter was born in Linton, N.D., on September 13, 1967, to August and Loretta Vetter. The youngest of 12 children, he was raised on a farm and educated in the Linton Public School System. After graduation, he attended North Dakota State University and Cardinal Muench Seminary in Fargo, N.D.

After receiving his Bachelor of Arts Degree in Philosophy, he studied at the Pontifical North American College and the University of St. Thomas Aquinas in Rome, Italy. He was ordained a priest for the Diocese of Bismarck by Bishop John F. Kinney at the Cathedral of the Holy Spirit in Bismarck, N.D., on June 29, 1993.

His first assignment was serving as Parochial Vicar at the Cathedral of the Holy Spirit and he taught religion at St. Mary’s Central High School in Bismarck from 1994 to 1999. In North Dakota, he served as pastor of St. Martin’s Catholic Church in Center, St. Patrick’s Church in Dickinson, St. Leo the Great in Minot and as Rector of the Cathedral of the Holy Spirit in Bismarck.

From 2004 to 2007, he was an adjunct faculty member for the Institute for Priestly Formation at Creighton University in Omaha, Neb., where he taught The Spirituality of the Diocesan Priest. In the Diocese of Bismarck, he served on the Presbyteral Council, Priest Personnel Board. He was Vicar for the Permanent Diaconate, Master of Ceremonies to the Bishop, and Director of Continuing Education of the Clergy. He served as Director of Spiritual Formation at the Pontifical North American College in Rome, Italy, from July 2012 through June 2018 and most recently as Rector of the Cathedral of the Holy Spirit in Bismarck.

On October 8, 2019 he was announced as Pope Francis’ choice to serve as Bishop of the Diocese of Helena. He was ordained and installed as Helena’s 11th Bishop by Archbishop Alexander Sample, Archbishop of Portland, on November 20, 2019. 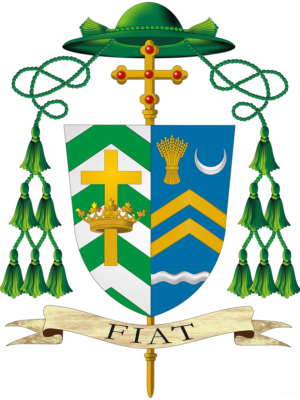 Description of the Coat of Arms of H.E. The Most Reverend Austin A. Vetter Eleventh Bishop of Helena, MT – U.S.A.

In accordance with the Roman Catholic Church’s heraldic tradition, the Coat of Arms of a Bishop is normally composed of:

Here was chosen a gothic shaped shield, frequently used in Roman Catholic Church heraldry and a processional bottony cross with five red stones to represent the Five Wounds of Our Saviour, Jesus Christ.

For his episcopal motto, Bishop Vetter has chosen just this one word, taken directly from the Angelus Prayer found in the Gospel of St. Luke, when Mary says her “Yes,” thus beginning the mystery of the Incarnation. By this choice, Bishop Vetter wants to express that in his entire priestly life, and especially now, he is called to assume the fullness of the priesthood with the episcopate. He places his pastoral service in total trust and obedience to the will of God, as did the Blessed Mother.

Blazonry (heraldic description) of the Coat of Arms of Bishop Vetter:

“Arms impaled. Dexter: chevronny of eight Argent and Vert, a latin cross enfiling an open crown Or. Sinister: Azure, a chevronwise gemel between a garb Or in dexter chief, a crescent Argent in sinister chief and a wavy barrulet of the last in base”

In the right side of the shield (in heraldry, right and left are exchanged from the observer point of view since it is customary to consider the right and the left side from the perspective of the soldier who, in ancient times, held his own shield), we find represented the Coat of Arms of the Diocese of Helena: a field of alternating silver (Argent) and green (Vert) chevrons, a figure best described as an inverted “V”, to heraldically portray the mountain peaks in the diocese.

On this field we find the crown of Saint Helen Empress, titular patroness of the See’s Cathedral- Church, conjoined to the Cross which her son, the young Emperor Constantine, saw in the sky above the sun, with the inscription that said ‘Conquer by This’ attached to it, before the battle against his enemies.

In the left side of the shield upon a blue (Azure) field is Bishop Vetter’s personal coat of arms which blends images representing his origins: the crescent moon for the Blessed Mother, the Immaculate Conception, patroness of the United States, the Diocese of Bismarck, and the Pontifical North American College (Bishop Vetter’s alma mater where he also later served on faculty); the sheaves of wheat which combines the concept of the Eucharistic symbol and the principle product of the farm where Bishop Vetter grew up; a “wavy barrulet,” the water representing “the spring of water welling up to eternal life” (John 4:14) and the Missouri River which begins in Montana and flows through Bismarck, North Dakota; and a “gemel in chevronwise,” one of them recalling the rafter holding the roof of the church which is set upon the foundation of the apostles with Christ Jesus as the cornerstone (having the meaning of protection) and the second representing the Rocky Mountains of Montana.

The color blue (Azure) symbolizes the separation from the worldly values and the ascent of the soul toward God, therefore the run of the Celestial Virtues which raise themselves from the things of the earth toward the sky. It also represents the Blessed Mother and the “Big Sky” of Montana. The silver (Argent) of the crescent symbolizes the transparency and the purity of the Virgin Mary.

The garb, sheaves of wheat, is in gold (Or), the first among the noble metals, then the symbol of the first of the Virtues, the Faith which enables us to believe in the Eucharistic Host, fruit of wheat, real body of Christ.