He was ordained a priest for the Diocese of Helena on June 21, 1985, at St. John the Evangelist Church in Butte, by the Most Reverend Elden F. Curtiss, Bishop of Helena.

Father Robert Joseph Hall has gone to be with Jesus and his blessed mother, whom he was looking forward to seeing. He passed away October 28, 2022, surrounded by his loving family. He was born in Butte on January 30, 1959, to Garland and Helen (Harrington) Hall. He attended Longfellow Elementary School, East Junior High School, and graduated from Butte High School in 1977. He continued his education by studying dentistry at Carroll College, while attending Carroll, Father Bob was called to Priesthood. He followed his calling to Mount Angels in Oregon. He was ordained at St. Johns Catholic Church in 1985. Father Bob served in Anaconda, Choteau, Bozeman, and finally his hometown, Butte.

Father Bob loved to travel and especially enjoyed his time traveling with his mother to Ireland, Rome, New Orleans, and California. He also enjoyed time spent on the links playing golf with his sister, Veronica Hall. Every Friday, you would find him playing cribbage with his sister and niece, Beth. He also enjoyed spending time with his great-nieces and great-nephew. He adored his little Boston Terrier, Garbo.

Special thanks to Deacon John Uggetti and Father Tom Haffey.

“For a Synodal Church; Communion, Participation, Mission” Pope Francis has called upon the Church to rejuvenate her synodal roots. He has opened a two-year synodal process which he hopes will reframe and renew our common Read more… 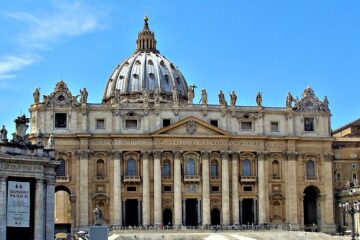 Bishop Vetter was invited to be the ordaining Bishop for his nephew’s class at their Diaconate Ordination in St. Peter’s Basilica on Thursday, September 29, 2022.  A seminarian for the Diocese of Bismarck, Steven Vetter Read more…